Skip to content
The Bible, the Word of God, is truly amazing!
I recently did some research and came across a whole lot of interesting archaeological findings that can proof the authenticity of the stories we read in the Bible.

Here are just a few that I would like to share with you. If you click on the highlighted descriptions, you will be directed to the websites where you can read more on each finding. I thus give credit to the involved websites for the images I’ve used. 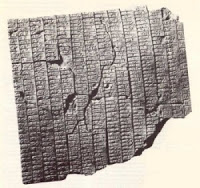 Let’s start with the Ebla Tablets.  1800 clay tablets were found during excavations of the Ebla palace in Northern Syria. On the tablets some familiar Bible stories were recorded, like for instance the destruction of Sodom and Gomorrah. There is also a creation record that is very similar to the one we find in Genesis 1.

Still on the subject of Sodom and Gomorrah... Balls of brimstone have been found at the location, near the Dead Sea in Israel, believed to be the sight where Sodom and Gomorrah once stood. On further examination of these stones, it was found that they had a hard burned shell with unburned sulfur inside. The composition of these brimstone balls are very unique and very different from brimstone typically found because of geo-thermal activity. Also, there is no evidence of any geo-thermal activity in that area.  This fits the description found in Gen 19:24, where brimstone and fire rained down on Sodom and Gomorrah to destroy the sinful cities (2 Peter 2:6)

After the tenth plague, Pharaoh gave his permission for the Israelites to leave Egypt. The Red Sea opened up before them by the hand of God and they crossed it on dry land. But the Pharaoh decided to follow the Israelites with an army of Egyptian soldiers on chariots, only to be swallowed up by the closing sea. (Ex. 14: 27-29) This really happened. Artifacts and evidence of chariot wheels, human bones and horse hoofs have been found in the Red sea where it is believed the Israelites had crossed.

The Babylonian Chronicles are clay tablets that record events from 605-594BC in Babylonia. Among other things it describe the defeat of Pharaoh Necho by Nebuchadnezzar, the accession of Nebuchadnezzar II to the throne and also the capture of Jerusalem. You can read the same story in 2 Kings 24:7-17. We also read about king Nebuchadnezzar and the captivity of Israel in the Book of Daniel.

Still on the Persian kings, we have the The silver bowl of Artaxerxes, which was used as a drinking cup. What is so significant about this bowl, is the inscription on it that translates: “Artaxerxes, the great king of kings, king of countries, son of Xerxes the king, of Xerxes (who was) son of Darius the king, the Achaeminian, in whose house this drinking cup/saucer was made.”  The Greek historian, Herodotus, also referred to these same kings. Why is this so significant? Because King Darius was the one who had Daniel thrown into the lion’s den (Dan. 6) and Nehemiah was the cupbearer of King Artaxerxes. (Neh. 1:11-2:1)
What about the New Testament?

I’ve stood inside the empty tomb of Jesus. (The next few pictures are all personal photos)

I’ve seen Golgotha were our Lord was crucified. The name Golgotha means “skull” and the image of a skull can clearly be seen on the hill.

Furthermore, most of the towns mentioned in the Gospels have been found and some of them still exist!

I’ve also visited the Pools of Bethesda, where Jesus healed a man that laid paralyzed for 38 years.
The Roman Historian, Tacitus, wrote about the crucifixion of Jesus in “The annals of Imperial Rome” and Josephus refers to the execution of John the Baptist in “Jewish Antiquities.”
So you see, the Bible is authentic. Every single word in it is the truth.
But, there are also the prophesies. In the Old Testament we find 353 prophecies concerning the birth, life, death and resurrection of Jesus. Here are just a few:

In Zech. 14:8 and Ezek. 47:8-9 we find prophecies stating that life will return to the Dead Sea.These prophecies are now being fulfilled as pools of fresh water with fish have been discovered.
The prophecy in Is. 19 concerning violence and disagreement in Egypt has recently been fulfilled.
Most of the prophecies that we read about in Daniel 11 have been fulfilled throughout world history in a remarkable way. There are some prophecies that still need to be fulfilled and some Bible scholars are suggesting that our current world situation is the start of those fulfillments.
All of this is amazing. But the most amazing thing about the Bible is its ability to open eyes and change lives. It is alive. It is God breathed. But don’t only take my word for it… go and read it and see what happens.
God bless
Madeleine

I am a passionate follower of Jesus Christ, author, blogger, homeschooling mother to a wonderful daughter and married to my best friend. My motto in life: Believing is seeing. View more posts